Your Loyal And Faithful Serpent 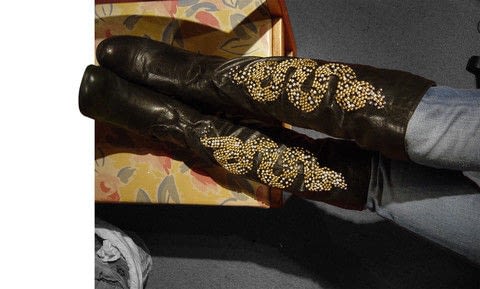 Fashion takes a walk on the Wylde side…
Christmas is coming, some geese are getting fat – even if noone’s wallet is – and the festive rituals are in full swing. To be fair, they have been for a month, already, so nothing hot off the press there, as such. In my opinion, it’s a mixed blessing. The freezing outside weather conditions add to the sense of coziness indoors and, with my home town being in the heart of historic England, the atmospheric darkness turns the scenery into an otherworldly fairyland bathed in incandescent flecks of light. I don’t mind that it’s the festival of mindless consumerism, for most of us, or that it entails weeks of trawling the manic shops to buy people things they don’t need (That said, for a real Nightmare Before Christmas, beyond anything Jack Skellington and pals could have dreamt up, look no further than the bedlam of Oxford Street!) However, when it comes to Christmas music – I’m talking music of the post-modern, non-religious persuasion, here – I remain of the bah humbug school of thought. Completely.

I have to say, this nation’s a funny lot when it comes to odd yearly traditions. “Awww, it’s so Christmassy…” they coo over the same novelty Christmas records, that were far from bearable to begin with, played year in and year out, ” it really gets you in the festive mood!” I’m still congratulating myself on getting this far and being able to avoid hearing Slade’s “Merry Christmas” so far this year, and all the other trite and embarrassing songs of the season (”Fairytale of New York” excepted)

I was always one to laugh in the face of conformity, when it came to things I didn’t see the point of. I’m going to take a similar angle of self-indulgence for this entry. My blog has, thus far, been predominantly mainstream and trend-led , but rather than covering what’s hot right now, I chose to copy something just ’cause I love it, and, I would say that it’s quite the perfect gift, but, be warned, there’s a serious risk of it turning out so fabulous, you’ll want to keep it for yourself! Hanging onto all that remains of the tough chic trend of this past year, I give you…. Thomas Wylde’s serpent boots – a Chic Cheat tribute