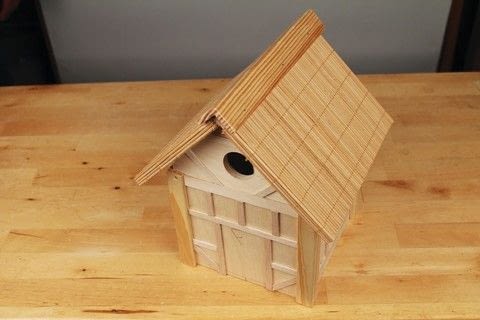 Bird House Make And Makeovers
Tudor-style houses were originally built as a wooden frame for the structure, with the gaps between filled in with wooden sticks and plaster. The style is still popular today, but the wooden beams are now fake pieces applied on top of the surface of the walls. The idea here is to try to recreate that look with pieces of wood applied to the surface of the walls. You can follow my design, or you can create your own version for other styles of Tudor beams. The beams are painted in a contrasting colour to give the building the effect of a Tudor house.

Making and applying the Tudor-style beams
Start the Tudor-style beams by adding the corner moulding to all four corners of the basic box. Cut the pieces to length and glue and nail them in place. I used the waterproof glue and the shorter 9⁄16in (15mm) pins in the nail gun. I made the beams the same length as the sides of the bird house, which creates a recess that the top will locate into. The next thing to do is to cut the ⅜in (10mm) wide strips that will cover the join between the roof and box. Mark and cut it to length between the corner angles, then place it on the front aligned with the top of the corner angle and draw a line across the box. Repeat this process on the back. This strip will be glued to the roof to hide the join between the roof and the box.