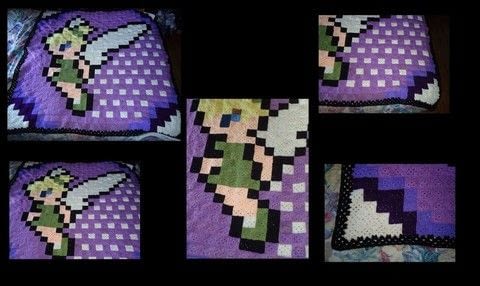 Crocheted 8-bit tinkerbell blanket with just a touch a fairy dust
I came up with this idea almost 4 years ago before ever really coming around craftster or anywhere else crafty.
But last summer I decided to make my niece a blanket thinking it wouldn't take long.. ha ha ha ha... God I was a tool thinking that.

Well it took me a while to find a tinkerbell that was 8 bit.. but than it didn't look right so I had to clean it up, adjust the colour, run around the house trying to find close enough shades in my yarn and actually crochet the squares..

Well I started around September 2011.. had to stop several times but I kept pushing myself [though from this I learned I'm like my mother and have an extra piece of bone in my right wrist..and apparently doing repetative motions like crocheting, irritates it.. so it gets very very painful but I kept going so.. lol].

I finished around the first week of November 2011. I did more than the needed squares 'just in case' because halfway thru the purple background squares I ran out of the yarn! So I had to find other purple yarns and hope for the best..

Well I put the project away until the second week of jan 2012 and my nieces birthday was coming up in march so I wanted it done for than.. So I pulled everything out again and counted all my colours...

Than I popped onto my trusty stitching program and spent about 6 hours straight trying to come up with an idea...

Than it dawned on me that since I had extra white.. I could maybe make it look like Tink is whipping by with pixie dust trailing behind her.
Than the corner pieces fell into place [I had just enough squares! the extra squares i had were all off shaped and basically unusable].
What luck!

I sewed each row than all the rows together.. everything took until 9 days after my nieces 5th birthday [which was march 15] to get done. Than I put it away until about a week ago after I finished testing a pattern for a craftster and making my dad's father's day gift.. I got in 'that mood' and decided to drop the backing idea and just make a border.. it probably would have taken maybe 8 hours in 1 day but I went to my sisters house a few times thru the week and didn't get home til late so i couldn't do it.. but I finished on June 23.

My original plan was to sew on a purple fleece backing but the blanket turned out to be larger than expected so I crocheted a border; 4 rounds, just of 2 inches wide on all sides.

The blanket now measures just over 59 inches wide by just over 61 inches high.

[I apologize for the giant sock pile in the corner of the photo my parents can never find matching socks in their room, lol.
Had to take the photo on their king size bed as my bed is a twin and we have evil dogs that will jump and frolick if I put the blanket on the living room floor to take a picture]

All I can say from finishing this is.. I'll never forget how to make a granny square every again =)

CanadianKitten26 posted this project as a creation without steps 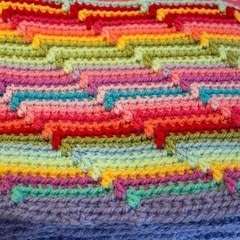 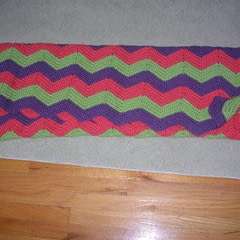 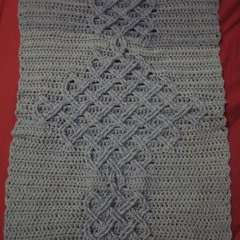 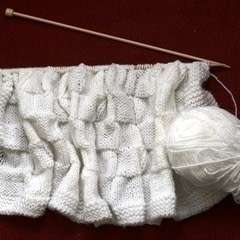 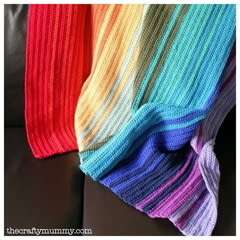 Rainbow Crochet Blanket
Made this project? Share your version »

July 4th, 2012
any chance you could make up a template i would love to patchwork this
Reply