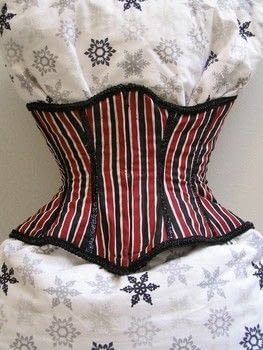 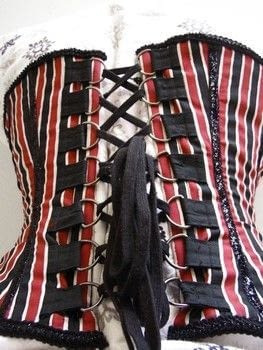 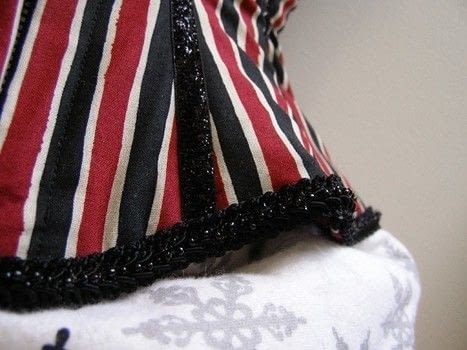 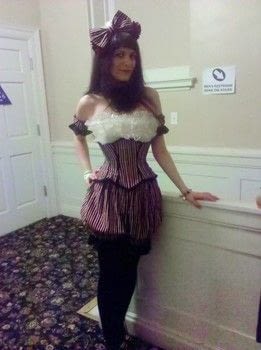 Tighten Up!
Ah, this corset looks more impressive then it actually is!

This is a reconstructed corset. Once upon a time, it was a purple overbust corset a friend crafted for me for a costume. But alas, he totally got my measurements wrong, and so I only wore the entire costume once before stashing it all away.
Eventually I decided I wanted to try and re-cover it, and that's exactly what I did! I cut off the bust section, and used some woven brocades to re-cover the whole thing for my first steampunk costume several years ago. Badass it was.
I decided to re-cover it once more, and did so for my outfit I wore to The Edwardian Ball last month in San Francisco. I took more time and put more effort into it, and I think it turned out amazing!
There are, of course, many flaws- I simply took pieces of fabric and sewed them on then flipped the ends over the top and bottom, so there are oodles of raw edges inside. Because I had to cover the back lacing, I had to create another way to do the lacing, so I chose D-Rings sewn on with tabs, which is a great and awesome idea, I just didn't execute it very well (so now it's coming apart).
The trimmings took FOR-EV-ER! The sparkly trim along the stays was fine, but at the edges I used a thick braided trim which had no interest in being sewn on by machine, so I had to do much of that by hand. I also got the notion that it needed a bit more pizazz, so I hand sewed a sparkly beaded trim over that.
But, the final product is pretty amazing, so all it's flaws and all my blood and tears were worth it!

However, I am now totally inspired to actually learn how to properly make corsets... Hello, 2011 goal!

Jessica posted this project as a creation without steps 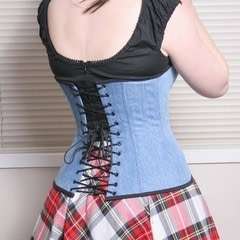 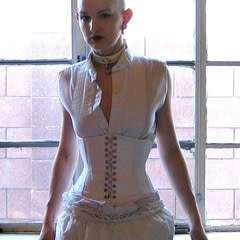 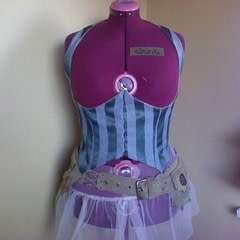 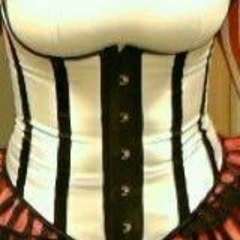 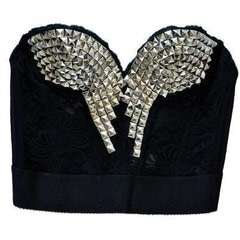 Lace Studded Corset From A Bra
Made this project? Share your version »

June 20th, 2011
use the sister site of your wardrobe unlock'd to learn to make a corset, and read my recent corset to get the gist of how I make one to fill in any gaps. It's not too hard, however, does that corset have spiral steel in it? I've been using flat steel and it gives a very old fashioned corset look. I'm sure that's the problem though, and not my patterns lol. Flat steel is great for the centre back and centre front though. Good luck
Reply

Arty Kitkat · St Albans, England, GB · 61 projects 11th February 2011
Wow that fabrics amazing. I can see why Sheila likes it too - it would fit really well with some of her designs too

Sheila Squirrel 11th February 2011
I love the stripes and the whole outfit looks great together. You can draft a pattern from the corset you have and then check out my underbust corset project for construction help. It's the black and white striped one. There's loads of info in the comments section too.
Reply