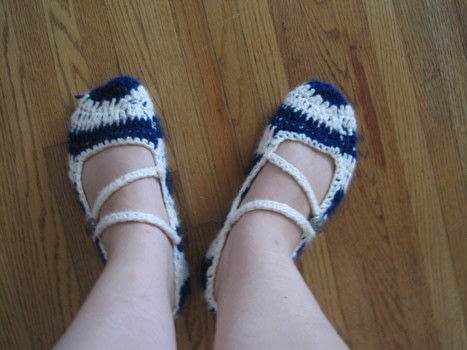 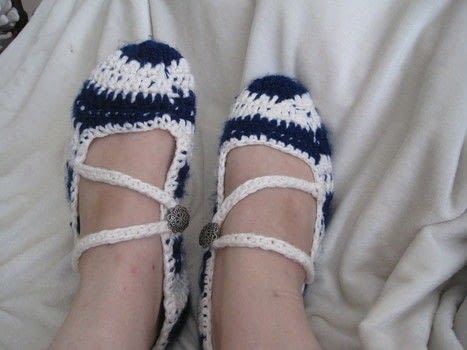 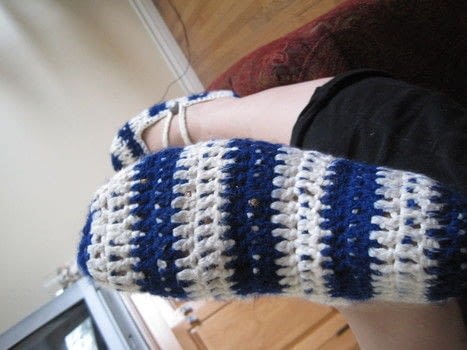 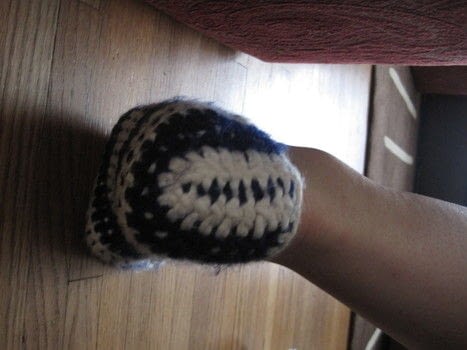 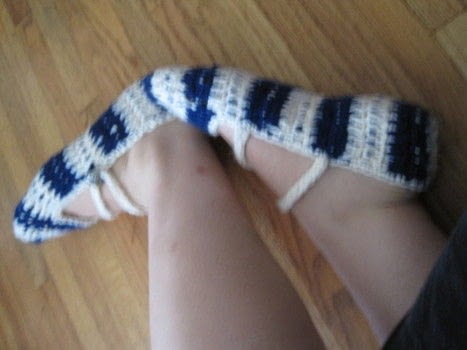 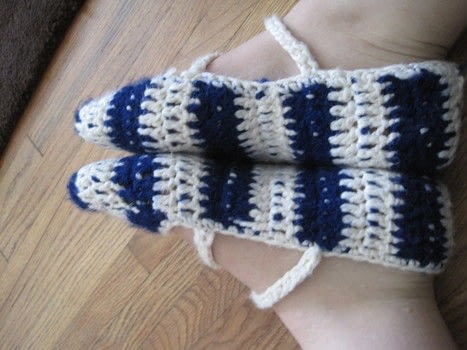 Easy, fast, crocheted slippers for you and friends!
First off, I'm not the original creator of this pattern. I got it from craftster, you can see it here: http://www.craftster.org/forum/index.php?topic=325313.0

I'm posting it here because I have modified it a bit and looove it, so I want to share it with all of you :) I made a pair of these for myself, then made a pair for a friend as a gift. My mom saw them and wanted a pair, and when my coworkers saw my friends pair, they all wanted them too. At the moment, I've made 3 and have about 9 more to go LOL.

For the blue/white pair (mine) I used a really soft blue acrylic and a silky-soft organic white cotton yarn. The blue/turquoise pair are totally acrylic and really soft. If you make yours with acrylic, the second they get a bit dirty, pop them in the washing machine.

This is a GREAT project for remainder yarn, as it takes about 1/2 a skein per color for a pair. I love amigurumi, so heaven knows I have tons of barely used yarn.

Also, the pattern is ridiculously easy. I crochet mine as I watch DVDs and shows :) You can make them in solid colors, thin stripes (one color for each round), thick stripes (2+ rounds for each color), with the v-strap as shown, a simple mary jane-style strap, make them higher (and thus strapless like I will for my arthritic grandmother)... basically, these are super customizable.

I wear womens US size 11 shoes and make these with 19 rounds. Its really touch and go, since the tension of your crochet will determine the fit. If your making them for yourself, just put them on every few rounds.

Krista B. · Hydesville, California, US · 44 projects 8th October 2011
I made theese for my niece. They are great, the easiest instructions so far! I'll get a pic up as soon as possible.
Reply

emmilou w. · Wallasey, England, GB · 12 projects 13th June 2010
thanks for sharing, i crocheted slippers for my daughters for christmas but they were more like a boot...these are more summer-like for them, will def be making some... ^_^
Reply

emmilou w. · Wallasey, England, GB · 12 projects 13th June 2010
thanks for sharing, i crocheted slippers for my daughters for christmas but they were more like a boot...these are more summer-like for them, will def be making some... ^_^
Reply