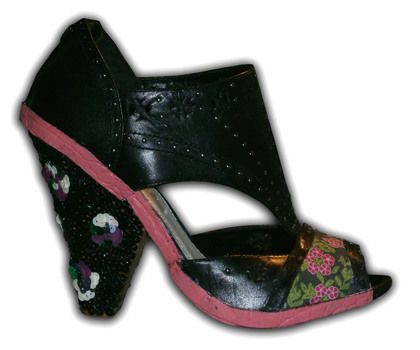 A D.I.Y. fashion homage to Nina Ricci's blooming fabulous blossom sequinned wedges
It’d be a tragic waste of electricity and our dear Mother Earth’s precious resources to expend energy stating the obvious about how fashion is ever-changing. Instead, I’ll focus on its long-standing love of the Far East. With all the mystique and mystery it has held, if, like me, you grew up in the 90s you’ll remember Japan as the setting of choice for computer games, a prized holiday destination for the super-rich kids, a slightly Orwellian technology capital and a chirpy, colourful haunt for cheesy pop music considered to be beneath British standards (Shampoo - British music's very own 'S' word since 1996!). It was the home of Hello Kitty, anime and a haze of bright colours and characters so brilliantly kitsch even the kitchen sink would be beaming in true genki style!

Fast-forward to the Spring 2012 shows when fashion saw a melee of Eastern influences from through the ages, including futuristic florals at Matthew Williamson, Chinoiserie at Julien Macdonald, a stunning gothic floor-length kimono coat at Corrie Nielsen - of which J-rock maestro Mana from Malice Mizer would surely be proud - and the Nina Ricci sequinned blossom wedge sandals that inspired this entry. The originals are currently standing tall at number 6 on style.com's must-have shoes of the season list. They've got it right this time, that's for sure - here's how to make your own: