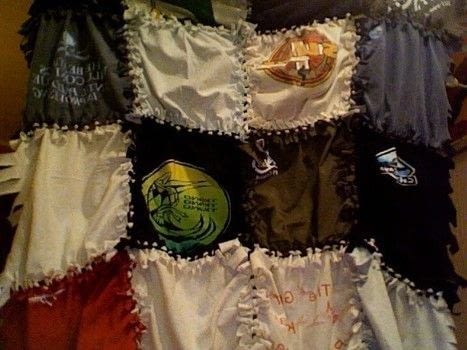 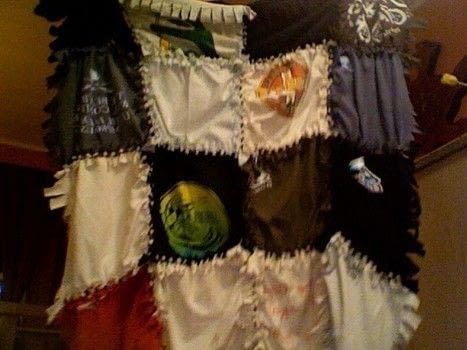 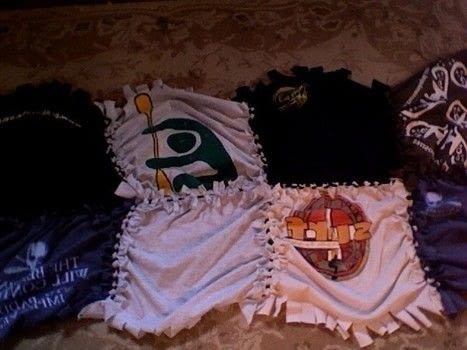 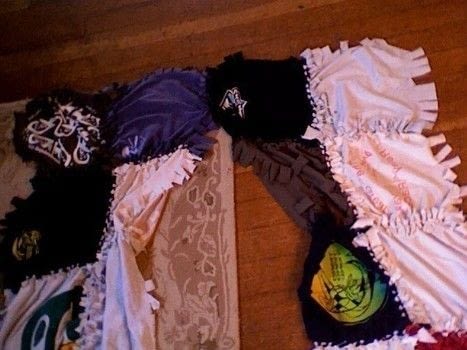 "Tie" this NO SEW project on for size!
So, a friend of my parents (quite literally) threw a bag of his old T-shirts at me and said, "Do something with these, would you!?"
So, I did.
I made a throw, or maybe a curtain. You decide. LOL!

I didn't take many pictures in the beginning, so I hope the written steps are enough.

I listed it as so-so difficulty because the cutting can be tricky. Nothing too difficult, but you need to pay attention.

It's going to take at least 2 hours, or more if you're easily distracted, like I am. Measuring and cutting takes a lot of time - less if you use a clear acrylic ruler, rotary cutter and ruled cutting mat rather than scissors and measuring tape. Tying goes pretty quickly, but you need to pay attention or you'll mis-tie.

Most of my T-shirt work (far more than what I have on this site as of now) has been inspired by Megan Nicolay's "Generation T: 108 ways to transform a T-shirt".
Seriously, it's the best book I ever purchased.
This specific project isn't in there, but so many awesome ones are! The book also has great ideas for all the scraps that are going to be left over after you're through with this "quilt".
Also, her website, though it doesn't seem to be updated very often, is www.generation-t.com

Chalk White for dark fabrics AND a darker color for light fabrics. Cutting Mat Scissors are okay, but I recommend a Rotary Cutter Makes life easier 8 Large or Extra Large T Shirt They need to be big enough to accommodate 16" square cut-outs. Ruler I use the clear acrylic ones designed to go with the rotary cutter.
Made this project? Share your version »

Regina K. · Thisted, North Denmark Region, DK · 5 projects 28th September 2012
Such a great idea I'm making one of my own it's a great project to do while chillin' on the couch watching tv.
Reply

Erica D. 24th December 2010
I'm going to try my hand at this. I need some curtains(: I was going to use some old shirts too but you know, I didn't want to sew. every. single. square. But I think juuuuuust to make sure, after I tie them, I'm going to reinforce them with my machine(:
Reply

Lizuh Lette · Amelia Court House, Virginia, US 27th November 2010
i think i just may do this for pillowcases or a blanket what would be cool instead of doing tsirts on both sides is to get some warm fabric and attached it the same on the side but just attached to the sides one whole sheet. that way not may shirts need to eb used too as long as they have backs to them
Reply

Buffy, status: vampire slayer · 2 projects 9th November 2010
this is so wicked!!!!! im going to try it with pillow cases u think it will work?
Reply

Nastassia B. · Sennfeld, Bavaria, DE · 4 projects 27th March 2009
Awesome! Am going to try this. I have lots of old baby and toddler shirts i cant part with maybe ill make them into throw for the beach or picknicks, that way ill always remember! Oh... i can even give it back to my son when he becomes a father. Thanks for posting this!
Reply

Frustrated Crafter · 10 projects 17th February 2009
Thanks! I think I'll be adding to this and actually giving it back to my parents' friend. After all, all of these shirts are his. lol!
Reply
Load 1 more comments...