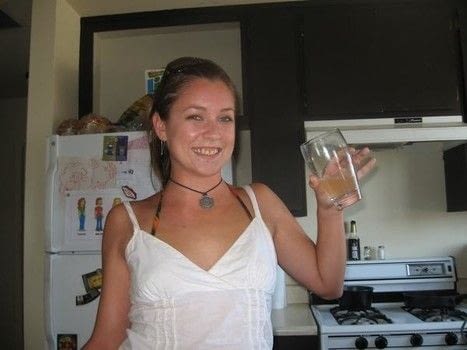 The perfect summer party drink!
This makes a great fizzy pink lemonade. It's definitely one of my must have summer staples. If it's hot, you're low on cash, and want to have a lot of fun, this is the answer! It makes just shy of 5 gallons, so it can serve a TON of people. Each drink packs a heavy whallop to your head, so you really don't need much per person. Enjoy!

Madeline O. 22nd February 2009
Oh and if anyone cares, we calculated that this drink is about 10% alcohol

Madeline O. 22nd February 2009
My friend and I made these last night, they were AWESOME! We made the whole big batch and it was all gone in like 15 minutes at this party we had. It was so funny because the whole time we were going, "What are we doing? This recipe sounds so weird... I'm not sure about this..." and then we tasted it and at the same time we said "That's REALLY good!"
A very recommended recipe

RAWRZ · Detroit, Michigan, US · 20 projects 21st February 2009
Hmm. Sounds great. Now, do you taste the beer? I, personally, cna't stand the smell of beer let alone the taste but Vodka on the other hand... lol So can you taste the beer or does the juice cover it?
Reply

Vanna · Santa Barbara, California, US · 2 projects 26th January 2008
you can get 5 gallon buckets at any hardware store. You can also find them for free a lot, most big restaurants get food items in 5 gallon buckets, or home improvement businesses of any type usually always have them lying around. Just make sure to sanitize.

cinderelly · 4 projects 25th January 2008
yay! cocktails count as a project...i love that, i think i have a lot of projects then! lol!
Reply

jme2shoes. 22nd January 2008
i love this. I am a bartender and always on the look out for more drink recipes!
Reply

Alex F. · Richmond, Virginia, US · 1 project 16th January 2008
This sounds great! My roommates and I are having a party this weekend, and this is perfect.
Reply
Load 2 more comments...