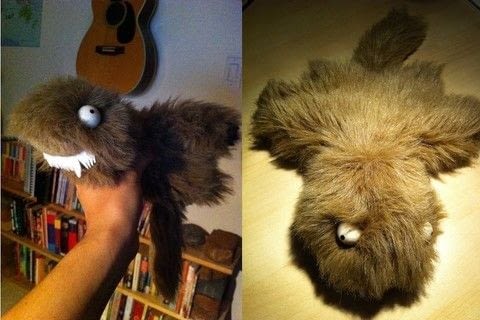 Warning: grotesque teddy bear mutilation ahead!
"Something came through the woods, above our heads. I glanced up, saw something brown and furry, but flat, like a huge rug, flapping and curling at the edges, and, at the front of the rug, a mouth, filled with dozens of tiny sharp teeth, facing down.
It flapped and floated above us, and then it was gone.
'What was that?' I asked, my heart pounding so hard in my chest that I did not know if I would be able to stand again.
'Manta wolf,' said Lettie. "We've already gone a bit further out than I thought...'"

-"The Ocean at the End of the Lane" by Neil Gaiman

My favourite mad-haired fantasy author was coming to town for a book signing event, and I wanted to make him a little gift. I would like to give him something really cool, really amazing... but I'm broke. So I made him a little toy manta wolf out of an old teddy bear.

A warning to the experienced crafters who are reading this tutorial:
I am not a sewing person. My crooked hand-stitches would make your grandmother vomit with rage. If sloppy sewing mistakes make your obsessive-compulsive seamstress heart pound with impotent frustration, turn back now. I have almost no sewing experience except for the occasional loose button, and if there is a "right way" to make a plushie, I'm pretty sure I did it the other way -- but I had an awful lot of fun.

Disclaimer: I don't own the idea of a manta wolf or any of Mr. Gaiman's other creations, and I made no profit from this -- unless you count happiness as profit, in which case it made me appallingly rich.

Chantal C. 6th April 2015
YOU ARE AMAZING! I love Gaiman's work too, and asdagsdagdfd his face!

Stitch along with #SewingSuperstar Carina from Polka & Bloom 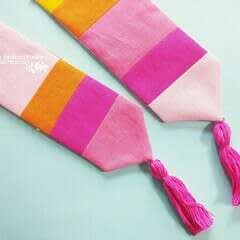