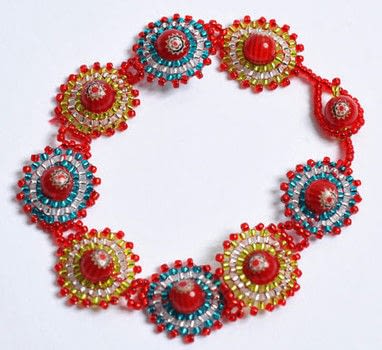 Make this marvellous mandala bracelet for some great wrist action

Beads Unlimited · Brighton, England, GB · 97 projects 14th May 2009
Millefiori is the Italian for a thousand flowers. Millefori cane originates from the Venetian island of Murano and is produced by a very intricate process resulting in something like a very elaborate stick of rock. It is sliced into thin chips which are then pressed onto a background of molten glass.
So glad you like it!

Beads Unlimited · Brighton, England, GB · 97 projects 8th May 2009
I'm so pleased this is proving to be a popular project as it's one of my favourites too!
Reply