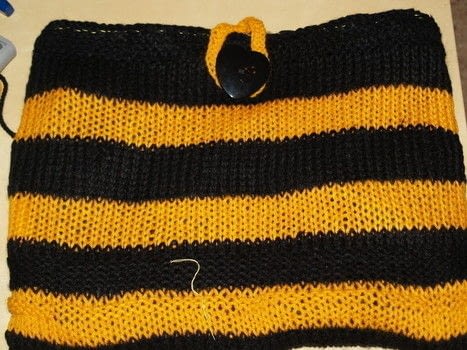 I want to be a buzzy buzzy bee...
If you haven't read my thread on the forums, I made this for my boyfriend for his birthday. He kept begging me to make him a bee jumper so I thought I'd do this to keep him happy haha, and to carry his laptop to and from uni.
I had to find out what laptop he had, then search it online to find out the dimensions which were 356x265x36mm.

Knittin' Kitten · Liverpool, England, GB · 32 projects 30th August 2009
Oh this was ages ago but he hated it =P he still mocks me for making him such a stupid present because he'd never use a laptop cover. And then I shout at him about how I sat for seven hours, knitting and watching episodes of Black Books over and over and almost went insane, and he feels bad.
Reply

Cat Morley · London, GB · 1432 projects 19th June 2008
That looks great, I like the colours you picked. I wish I had knit Tom a laptop cover rather than sewing one!
Reply

northernstar · Flateyri, Westfjords, IS · 35 projects 23rd May 2008
It turned out great! I am sure he will love it

Knittin' Kitten · Liverpool, England, GB · 32 projects 23rd May 2008
I can't get the hang of gauge Queenie, I get by okay! I just guessed what size needles to use as well, I figured that if they were fairly big it'd take less time but using my 15mm ones would be too big. That's the kind of thinking that got me through this!
Reply

queenfairypants · Manchester, England, GB · 75 projects 23rd May 2008
oh yeh and the case is so good!
Reply

queenfairypants · Manchester, England, GB · 75 projects 23rd May 2008
''Congratulations! You have lost the will to live. You contemplate knitting a noose to hang yourself with, but the thought of touching a pair of knitting needles makes you weep.

Then get excited because you found a tutorial for knitted flower brooches.'' LMAO!

Speaking of vagueness and guessing I don't even know what a gauge is..never bother with any of that when I'm knitting!
Reply