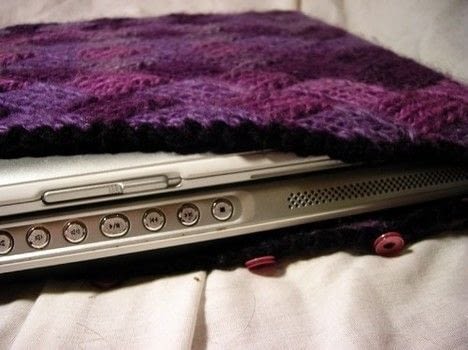 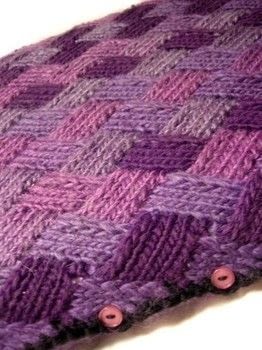 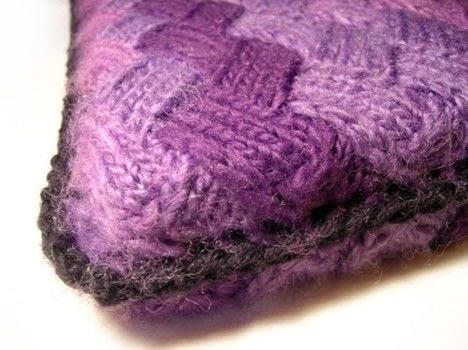 If only my laptop were soft and squishy.
Pattern: my own (see below for basic notes)
Yarn: Di’Ve Teseo in ?? (purple, obviously)–3 skeins, and a couple dozen yards of Cascade 220 superwash in black for the edging
Needles: US10.5 circs, 6mm crochet hook for edging
Duration: too damn long, also known as over a year.

The concept behind this thing is pretty basic; I knit two panels of entrelac roughly the same dimensions as my laptop (actually a little smaller, because entrelac stretches quite a bit) then attached them.

The original edging that attached the two panels was on there for a good eight months, and it was hideous. Some slightly fuzzy bulky black yarn, haphazard picked up stitches, some sort of three or four or twelve needle bind-off that made the whole thing twist and buckle weirdly. I finally got up the nerve to replace it, and I’m glad I did–my finishing skills have obviously improved.

First I loosely basted three of the four edges together, then I took a crochet hook (the only one I own) and did some sort of crochet thingy all the way around with two strands of the 220 held together. That’s really as technical as I can get about it, unfortunately, as I just made loops and chains until it looked right. Then I removed the waste yarn, did the same crochet loops until it looks right around the open side, adding in an extra chain here and there for buttonholes.

The buttons themselves I <s>stole</s>recycled from an old shirt.

The finished product looks pretty awesome, I must admit. My only problem is that my lappy is a clunky six pounds, which makes me wary about actually carrying it in anything other than a hard case. I’m half considering making a pillowform to put in it instead, which leads me to the title of this post.

if I do leave it as a laptop case, I have plans to <s>cannibalize</s>recycle an old belt to use as a carrying strap.

jessamyn posted this project as a creation without steps 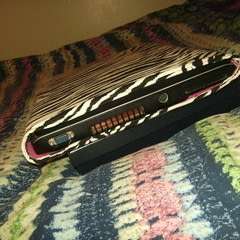 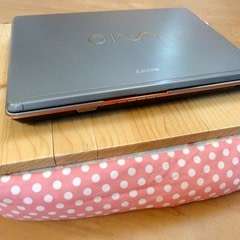 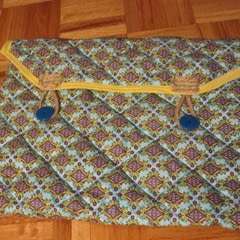 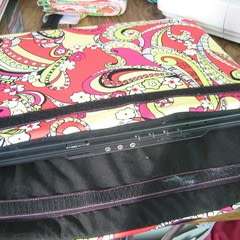 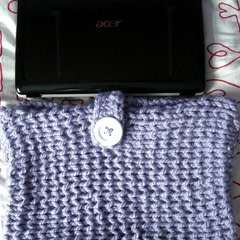 Riechan · Limbourg, Walloon Region, BE · 21 projects 3rd March 2008
I've been thinking of something like that for my laptop, and now I see it here ^^
love it, mine would have to be a bit "steviger" because my laptop is heavy
Reply

Piffle · Northern California, California, US 2nd March 2008
Wow! It looks fantastic and congrats for sticking with it. It's a beauty!
Reply

Kirsten B. · Las Vegas, Nevada, US · 40 projects 2nd March 2008
I love the color, I might try making somthing like this with my sewing machine.
Reply

northernstar · Flateyri, Westfjords, IS · 35 projects 1st March 2008
This is very cool and the colour and stitches are gorgeous!
Reply