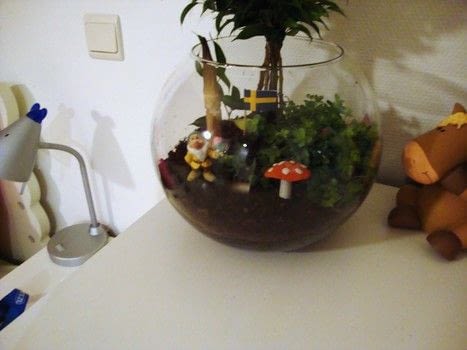 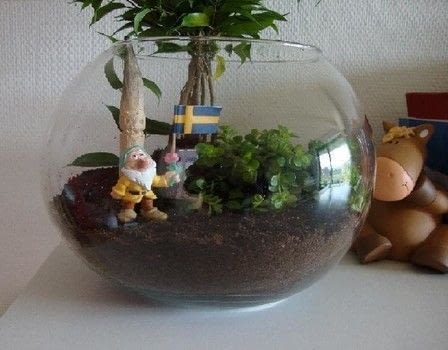 Based on Gnome Terrarium by EVEnl
I liked the gnome terrarium so much I wanted one for myself. So i started looking for gnomes, but thery're always hiding! (Someone should tell them they don't have to be scared of human beeings). Whatever. I couldn't find anything to put in the terrarium that was small enough, so a friend of mine made a little wooden gnome. And then, two weeks after I made the terrarium, i was walking around in the city when suddenly I saw a toy store with thousands of these little disney dworfs! Well, they're not gnomes but they're at least as cute. They were extremely expesive (for a plastic toy) but i really wanted one. You can not believe how happy i was! And to complete the terrarium, i made a little mushroom out of fimo clay. Praise the one who had the idea of making a terrarium for a plastic fantasy figure!

polkadot posted this project as a creation without steps

polkadot · Belgium, Wisconsin, US · 13 projects 22nd March 2010
I went to Albert Heijn last week, didn't see them anywhere.
But I still like the supermarket: there are so many products that aren't for sale in Belgium. Especally when it comes to vegetarian food. We don't have that much of a choice here. I'm happy to be someone who lives at the frontiers!

Maladignia · Amersfoort, Utrecht, NL · 87 projects 18th March 2010
Too bad you had to buy an expensive plastic doll when here in the Netherlands the AH sometimes has actions where you get free dolls with a certain value of groceries. This includes Smurfs and Disney figures.

Still, I really like the look of your version.

EVEnl · Leidschenveen, Zuid-Holland, NL · 319 projects 12th January 2010
Thank for trying it. Yours is so cool YAY! I love the palm tree, the mushroom, that cute dwarf(it's named Bashful right?), the flag, your wooden gnome EVERYTHING!!