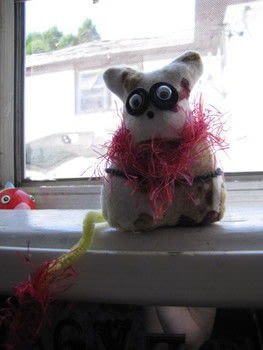 Based on Fabric Cats (Or Something Like That) by Alice L.
My version of "Fabric Cats (Or Something Like That)" and further proof that I am not a sewer. It took me two and a half hours just to sew him including the half hour it took to sew on the buttons. I decided to give him a mane and tail, based slightly off of the ones worn by Rum Tum Tugger from CATS the musical, which is AWESOME by the way. I have decided to name him Tug. If I ever make another, I shall make him into Misto.

Neon C. posted this project as a creation without steps

Alice L. · 8 projects 13th July 2010
no, of course sewing machines do not eat your fingers.
they're vegetarian ;)
Reply

Alice L. · 8 projects 7th July 2010
this is awesome! your cat is so glamorous. but don't be sad because it took you a hundred hours, it's ok. we all have to begin somewhere. when i began sewing i was soooo slow, and i was so afraid the machine would eat my fingers that my mother couldn't help laughing at me. but that's just fine. tug is just the beginning. now it's all about keeping it going!
Reply