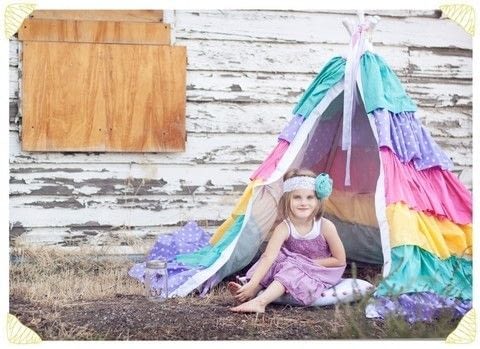 Sew a Dreamy Teepee
I love love love over the top dramatic things... um, well except for when my two year old goes that way, although sometimes that can be funny. But, when it comes to photo shoots and said two year old's room the more over the top the better. I have been wanting one of the ruffle teepees that I have seen online and in gorgeous boutiques for a while but had yet to find one for under 200 dollars. Since I don't have that kind of mola, I decided I would have to try making my own. While it isn't "difficult" per-say it is time consuming, and a bit of an exercise trying to harangue all that fabric while sewing ha! The secret to keeping this affordable is sheets. Yup, sheets. All of the ruffles you see before you were once a flat bed sheet from Pottery Barn. I bought mine in a factory reject store, but you can use any sheets. As I mentioned before this is not technically advanced sewing but it does take a good chunk of time to do. It is a hefty amount of gather stitching with a lot of pinning and re-pinning. If you are up for it lets make a Dreamy Teepee!

Ribbon For Ties And Decor Ribbon for ties and decor Thin Rope Or Several Strong Rubber Bands King Sized Sheet Or Two Twin Sheets Sewn Together. One Package Of The Widest Quilt Binding Available. Cute Embellishment(s) For The Top Of The Teepee Several Twin Flat Sheet s (The Number Depends On How Fluffy You Want Your Ruffles And How Many Layers You Think Looks Good. I Had Extra Fabric Left Over) 6 Pvc Pipe s (Mine Were The Precut 5 Ft. Ones At Lowes For 1.30, If I Did It Over I Would Have Them Cut Me 6 Ft Ones From The 8 Ft Poles, The Ten Is A Bit Squatty No?)
Made this project? Share your version »

Witchy · New Zealand, Prince Edward Island, CA · 43 projects 1st December 2013
lol.... i hear you on the finding one under $200 and I have always wanted to attempt to make one, but now I think I definitely will before my daughter is too big to enjoy a lil mini teepee!! Thanx for the tutorial and I love your photos!!

Beccasaurus · Vancouver, British Columbia, CA · 8 projects 29th November 2013
OMG this is fantastic! I want to make one for myself