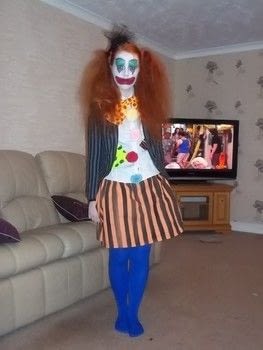 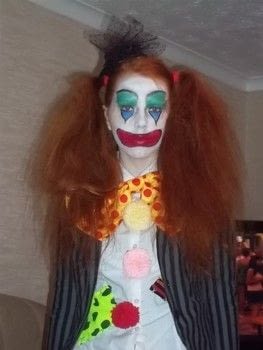 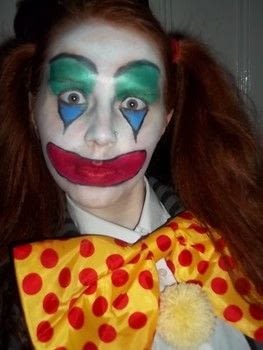 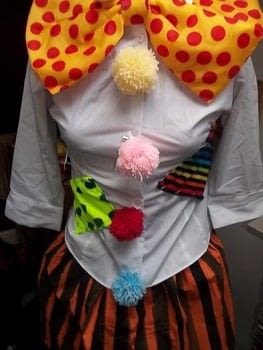 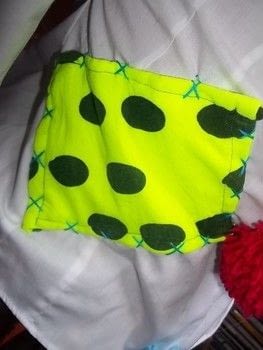 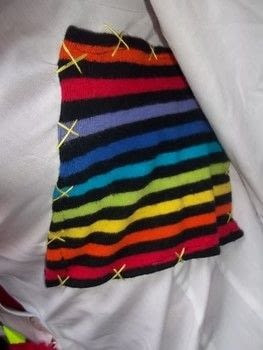 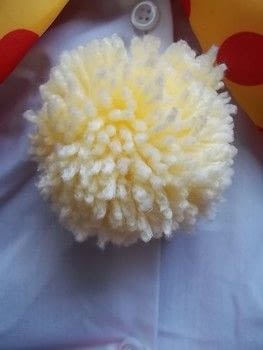 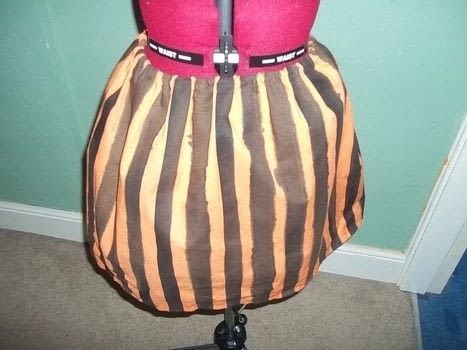 Clown Costume For Halloween.
Well, for Halloween this year I decided to be a clown. I'll quickly go over the outfit, (if anything I say is unclear, just ask and I'll try and explain it better).

Skirt:
This was made by taking a large strip of orange material and painting black stripes on it (using the masking tape method to get the lines straight) I used acrylic paint, but fabric paint would probably have been better. Also if you want your stripes to be crisp and straight, make sure you don't use any water with the paint (as I found out the hard way) but I quite like the effect of the paint running slightly, even if it was an accident. Then one it's dry, just hem the edges, then fold over the top and stitch it so that there's a tunnel of sorts, which you can then just thread elastic through, then stitch the remaining edges together.

Shirt:
Take a plain white shirt, and stitch some coloured patches to it, using embroidery thread and big 'x' shaped stitches. Then pin some pom poms to it.

Pom Poms:
I used this you-tube tutorial to learn how to make them:
http://www.youtube.com/watch?v=a03BTR3_3qg
I then used the loose ends of the wool to tie it onto a safety pin.

Make-up:
I think this is fairly self explanatory. I did the white base coat with face paint, but in retrospect I think that I may have been better off using a white foundation, as the paint did not sit well. The mouth was done with lipstick, the eyeshadow, was done with eyeshadow, and the rest of it was done using face paint.

Hair:
I just put my hair in pigtails and backcombed them. Then added a mini top hat.

Everything else I'm wearing I just had lying around.

Also, it's not in any of the pictures, but I was wearing a pair of bright green Doc Martens, as shoes.

Eleanor posted this project as a creation without steps

Operation! You're The Doctor!

Girls Gone Wild Costume Aka Censored
Made this project? Share your version »