Hello fellow Harry Potter fans. I was reading blogs as usual when I stumbled upon a topic about the Harry Potter Houses. As I was reading the blog, I started thinking which house would I fit into if I was a student at Hogwart. (I love the books and movies)

I belong to the Hufflepuff House. So which house do you belong to?

Read each houses description and traits below to decide which house you belong to.

Hufflepuffs are frequently looked at as the leftover house, and where this is sort of true as if you do not fit into any of the others Hufflepuff will take you, it doesn't mean that you are not important. A lot of people would not even be able to get into this house because they do not value hard work or fair play as a decent person should.

Hufflepuffs are seen as a steady, mellow house that are very accepting of everyone. They are not deceitful but nature meaning that if they say something is true then it is - they rarely lie. .

Hufflepuffs, however, can be seen as cowardly as they are not very confrontational. They may be extroverted and friendly but if challenged will back down and submit. But if a Hufflepuff is in a crowd of people the will stick out there opinion till the end so to back up their comrades. But they do not like being in the limelight and so tend to follow trends instead of creating new ones.

Hufflepuffs understand that if you work hard then you will get further and so this means that if they set their minds to doing something they will stay with it.

Hufflepuffs have more of a tolerance of different people and so are most patient when dealing with people with different views. This patience also applies in their work as they are willing to put in a lot of hours to accomplish something where as other would give up after one.

Slytherin house is known for producing bad wizards but that doesn't mean that if you are accepted into this house you will be inherently evil - Ambition is NOT evil, nor is cunning. Ambition is what gives people drive, which is essential to advancement.

Slytherins are willing to play for the other team once in a while if it benefits them. They are not coy about doing what they need to do to achieve their goals, but sometimes their ambition can get them so caught up that the do not realize what they're doing can hurt people. They might often break rules and manipulate people to get what they need to done.

Slytherins are very good about getting things done because they have the drive to do so and the resourcefulness to be able to complete a difficult task. This is why they are considered good leaders.

They can be more open minded about certain things but then if it interferes with your day to day lives you wouldn't hesitate to reject it. They can be judgmental towards unfamiliar things, which is why they tend to stick with groups they know.

Slytherins tend to hesitate before acting, so as to weigh all possible outcomes before deciding exactly what should be done. You are scared that you will embarrass yourself and so can frequently be on defense when talking to someone, or even the offensive so to prevent people from mocking you.

They tend to deal with their problems on their own rather than expressing their emotions outwardly unless provoked. They are more distrustful than most and can often be viewed as cold.

Gryffindors are the 'ideal' house who will put others before themselves and go beyond the call of duty when need be. The are seen as very brave in the face of danger but sometimes they can go over the top or make desistions to rashly causing unneeded conflict.

They are seen to be very charming and out going towards a range of people but can be very closed minded to those they think are 'wrong'. If you don't follow there regeim they could be quite cold and even mean to you. If you get into an argument with a Gryffindor they are less likely to back down.

But they are seen as generous to those who arent as socailly adept to them. If they see someone in the corner of a room, not getting involved, the are likely to help them along by making introductions. This means that they can be good leaders as they are aware of the people around them and give off a warm, inviting atmosphere. Gryffindors tend to be more trusting of people.

Gryffindors are seen as quite proud of who they are and so if someone critises there honour they are likely to pick a fight. They stick up for what they believe in without even slight waver but this can mean that the bigger picture can be lost to them.

Gryffindors can often have a certain disreguard for the rules and do what they think is 'right' dam the consequences. The might often seek out adventure and are really seen to live life to the full. Gryffindors tend to live in the 'now' and don't worry about the 'later'.

Gryffindors in general love being the centre if attention and will often seek it out. They are very socailly adapt but can also be very in-you-face.

Ravenclaws are the most open minded of the houses. They like to be in smaller gatherings of people with the same ability and don't like large gathering. They are the most introverted house as well and this means that they can be looked upon as shy.

They can seem very self obsessed at times but only because they have such an inquisitive mind that means that once they have started on a project they won't give up until its done.

Ravenclaws are ambitious but not for personal gain but for the sake to wanting to know more about the world. The care little for the material aspects of life and prefer to turn to deeper matters.

There open-mindedness means that they excel easier in areas of learning because they don't have stubborn beliefs or principles that can hold one back from understanding new information's.

On the other hand Ravenclaws can find social situations very difficult and can be considered rude when they do not respond to something in specific way e.g. laugh at a joke. They can be disconnected from the rest of humanity even though they tend to have a deeper understanding of it then most.The frequently think outside the box but then this could mean that people don't understand them.

They are good at giving advice, have strong empathy and are avid researchers but if taken out of their comfort zone of books and logic then they can get a bit lost.

I'm DEFINITELY a Ravenclaw - which I've known for a while now. I have a Ravenclaw shirt, and made myself a Ravenclaw jersey, too!

I love the house and their principles. I love everything Harry Potter, but I'd definitely be a Ravenclaw if I went to Hogwarts.

I honestly could fit into Ravenclaw probably the best, but I'd also fit into Gryffindor or Slytherin just as easily. I won't lie about my faults, I'm a nasty piece of work in my mind, I just am smart enough to know when to keep my mouth shut.

I’m a Hufflepuff, but I don’t fit in with all of their traits thou. I stand up for myself and I don’t back down if I’m right or if it is something I believe in. I don’t need a large group, are being in the spotlight all the time. Once I start something I usually work hard to finish it. I always give people the benefit of doubt and I welcome all walks of life into my group.
Lol. I'm starting to sound like a Gryffindor.

Um...I'm a mix between Gryffindor and Ravenclaw! My best friend, however, is a mix between Hufflepuff and Slytherin (if that makes any sense...) 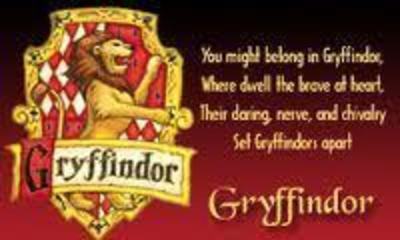 RAVENCLAW MOST DEFINITELY, which is good, because I own a Ravenclaw jacket. I love academics esp. books and hate being social, I've been told that I'm too confidant to be shy, so I'm "stand-offish" 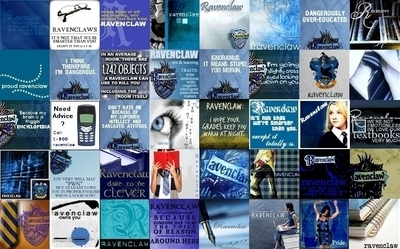 I consider myself as a Slytherin.

Actually even Pottermore's quiz placed me there, yay! :"D
I think I also have some ravenclaw qualities, though.

(ugh and sorry if my english is even worse than usual, I guess it's time to go to sleep)

Definitely a Ravenclaw. My elementary school teacher used to have a Hogwarts themed summer daycare program, and would even sort us all into houses and count up House points based on tasks like picking up after snack time and lunch, or winning 'Quidditch' games (not the official version played by a lot of colleges...more like field hockey played with broom-shaped sticks and a soccer ball with a small yellow bouncy ball snitch flying through the court, and beach ball bludgers...I was seeker

). Even though she sometimes sorted the same people into different houses each year, I always ended up in Ravenclaw. After Luna came into the books, I felt better about never being a Gryffindor (for some reason, she would always put SOOOO many people into Gryffindor, only slightly less in Hufflepuff and Slytherin, and only a few people in Ravenclaw). With your description, I'd say she was right, though...10 years later, I fit the Ravenclaw description now more than ever.

I wish I was a ravenclaw, I fit into the traits the best and I've always thought I was a ravenclaw. But when I joined pottermore I was sorted into hufflepuff which was disappointing so I tried again and I was hufflepuff. Then just last week I took the test again to see if I've changed at all but no.. I'm destined to be a hufflepuff..

IM RAVENCLAW TO A T. lol That description sounded like my life story. Haha creepy. I'm intelligent, like to study/research things before speaking. Very loyal & likes to give advice, accepting of all others, extremely open-minded. Plus I'm gothic/punk, which can be seen as different. Im very socially awkward & introverted bc of my syndrome, & looked at as being Shy. WOW.

I took a online quiz once & got Slytherin multiple times tho. That kind of made me happier. Lol but apparently I'm not as bad as I wish to be. Haha

pottermore placed me in hufflepuff, which i'd never even have considered before. i always thought i'd be a ravenclaw or slytherin. but having read up about hufflepuff more once i was placed in it, i think it's pretty accurate and i now own a whole host of hufflepuff stuff.

ravenclaw... with a dark slitherin persona

Or using your email address